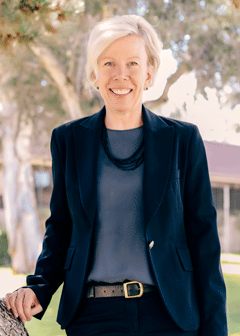 Anne practices in the areas of general civil litigation focusing primarily on design and construction disputes, and litigation involving real estate transactions and property rights. She handles complex litigation matters and has honed her skills in civil law and motion practice to the benefit of Epsten, APC’s association and commercial clients who find themselves in litigation. She has also handled many appellate matters for the firm’s clients. Her work on civil writs and appeals has resulted in several published decisions shaping the law in construction claims in Bodell Construction Company v. Trustees of The California State University (1998) 62 Cal.App 4th 1508 (representing the Trustees), Treo @ Kettner Homeowners Association v. Superior Court (2008) 166 Cal.App.4th 1055; Villa Vicenza Homeowners Association v. Nobel Court Development LLC (2011) 191 Cal.App.4th 963 (review granted); Pinnacle Museum Tower Association v. Pinnacle Market Development (US), LLC (2012) 55 Cal.4th 223 (as counsel for amici curiae Consumer Attorneys of California and Executive Council of Homeowners), to name a few. Anne has also given back to the legal community in a variety of ways by serving as pro bono counsel on matters of widespread public interest. For example, she represented the Coalition for the Restoration of Parental Rights, as amicus curiae, before both the California Court of Appeal and the California Supreme Court, resulting in the published opinion of In Re Marriage of Harris (2004) 34 Cal. 4th 210. In 2014, the San Diego Daily Transcript named Anne as a Top Attorney in the Real Estate & Construction Litigation category.

While in law school, Anne served as a Judicial Extern at the California Court of Appeal, Fourth District, Division One. She also served on the Board of Directors of the Women’s Law Caucus at the University of San Diego School of Law, and in her third year of law school served as the liaison between the USD Women’s Law Caucus and the Lawyer’s Club of San Diego. Anne is now active in the legal community as a member of the San Diego County Bar Association, Community Associations Institute, and from 2000-2001 served as the Co-Chair of the Membership Committee for the San Diego Chapter of the Community Associations Institute.

Anne is also active in the San Diego community as a member of The Thursday Club, a philanthropic organization founded in Balboa Park in 1921 that supports multiple community service projects in San Diego each year.

There are no upcoming events to display at this time.