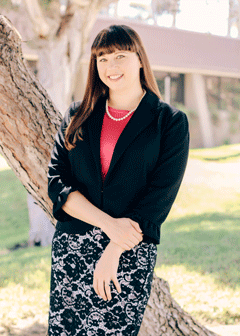 Dea C. Franck attended Thomas Jefferson School of Law, where she earned her Juris Doctor summa cum laude and was class valedictorian in 2011. While attending law school, she was the Editor-in-Chief of the Thomas Jefferson Law Review and was a recipient of numerous Jefferson Medals and CALI and Witkin Awards of Excellence. In addition to her academics, Dea clerked for the National Labor Relations Board- Division of Judges in San Francisco, California as a Peggy Browning Fellow. She was also a judicial extern for Federal District Judge Jeffery T. Miller and Magistrate Judge William V. Gallo in the United States District Court, Southern District of California. Prior to joining the firm, Dea worked as a post-bar judicial law clerk in Honolulu, Hawaii for Associate Judge Alexa D. M. Fujise in the Intermediate Court of Appeals for the State of Hawaii. During her clerkship, she reviewed appellate briefs and records on appeal and assisted in preparing disposition orders and published opinions.

Dea is originally from Martinez, California, located in the San Francisco Bay Area. She attended the University of California Irvine, where she earned her bachelor of arts in drama in 2003.

I also enjoy frequenting thrift shops, antique stores, and tiki bars to grow my collection of tiki mugs and general tiki ephemera. I have over 100+ mugs and am always on the hunt for more.