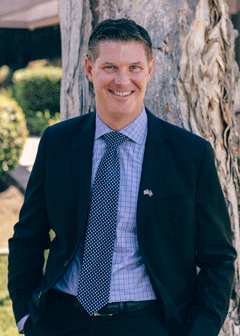 Kieran Purcell graduated from the University of Colorado at Boulder. After serving seven years in the United States Navy, Kieran attended California Western School of Law and joined Epsten, APC in 1995. Kieran’s work on behalf of community associations includes providing advice on all types of corporate matters including litigation, interpretation and enforcement of governing documents and reconstruction issues. He has been a shareholder of Epsten, APC since 2002 and now serves as Vice President and CFO of the firm.

Kieran spent three terms on the Board of Directors of the San Diego Chapter of the Community Associations Institute (CAI), where he served as its President, co-chaired the National Seminar Committee and co-chaired the Golf & Tennis Charity Classic. Kieran is a delegate for the San Diego Chapter’s Legislative Support Committee (LSC), a former Legislative Co-Chair for the California Legislative Action Committee (CLAC), and now serves as Chair of CLAC. During his tenure with CAI, Kieran has earned the San Diego Chapter’s President’s Award four times, and in 2006 was recognized with the Samuel L. Dolnick Lifetime Achievement Award. He is a newly inducted fellow of the College of Community Association Lawyers (CCAL).

In September 2015, Captain Kieran Purcell retired from the United States Navy after 30 years of active and reserve service, including 3 tours as Commanding Officer.

A former President of the San Diego Chapter of the University of Colorado Alumni Association, Kieran served 5 years on the University’s National Alumni Board of Directors.