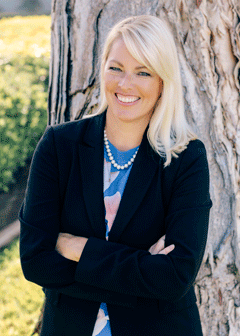 Mandy D. Hexom, practicing general civil litigation since 2001, focuses her practice on disputes involving contracts, construction, real estate, common interest developments, corporate governance, employment, and defense of fair debt collection practices claims. Prior to joining Epsten, APC Mandy worked at a small boutique law firm and then at one of the longest standing national law firms, Buchanan Ingersoll & Rooney. Mandy has worked in the legal field since 1994, starting as an intern with the Santa Barbara District Attorney’s Office and later as a law clerk for the Oregon Department of Justice and Marion County District Attorney’s Office.

Mandy has tried and arbitrated cases in San Diego and Riverside Counties involving complex commercial real estate matters, tort claims, contract disputes, easements, and construction disputes. In 2011, serving as trial counsel for a commercial retail center, Mandy obtained a multi-million dollar award for the client on the cross-action. In handling various litigation matters over the years, Mandy has gained the knowledge and experience to understand and manage the layers and complexities of litigation and its potential implications. Ultimately, Mandy is committed to servicing the client and exceeding client expectations.

At Willamette University College of Law, Mandy was Editor-In-Chief of Willamette Law Online, she competed in a national competition on the moot court trial team, and was an Order of the Barristers honoree upon graduation. In 2015, Mandy was named “Best of the Bar” by the San Diego Business Journal. Mandy was born and raised in San Diego.

There are no upcoming events to display at this time.