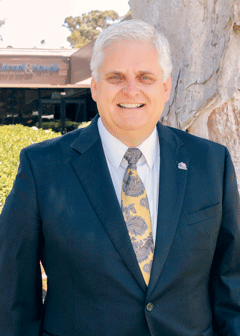 Rian W. Jones is the Chair of the Litigation and Appellate Departments at our firm with over 35 years of experience and having tried over 70 Superior Court jury and bench trials. Rian focuses on all aspects of civil litigation handled by the firm including enforcement of CC&Rs, the defense of homeowner associations and HOA boards, Employment Law, Real Property issues and General Liability claims including environmental claims (mold, asbestos, etc.). Rian has earned an AV® PreeminentTM Peer Review Rating from the prestigious Martindale-Hubbell Law Directory and has received numerous awards and professional recognition including being named as one of San Diego’s Top Lawyers and one of the Top Lawyers in California. Rian is a Barrister in the American Inns of Court Foundation.

Rian attended Brigham Young University and Western State University in San Diego where he received his B.S. (1981) and J.D. (1984) degrees. He was admitted to the California Bar in 1985 and also is admitted to practice before the U.S. District Courts for the Southern and Central Districts of California as well as the Ninth Circuit Court of Appeals. He has been a lecturer for various continuing legal education programs dealing with Civil Procedure, Litigation, Depositions and Jury Selection. He has served as a Judge Pro Tem for the San Diego Superior Courts hearing settlement conferences, and has been an Arbitrator on the Court’s approved panel since 1990, having heard and decided over 100 arbitrations in that time.

Rian is a native San Diegan and is active in his community and church. He has served as a Boy Scout Leader in various capacities including as a Varsity Team Coach and Explorer Post Advisor. Besides a life-long love for camping and hiking, Rian enjoys travel, photography, and golf. He is fluent in Italian and loves traveling to Italy.

Our Annual Legal Symposium offers comprehensive legal information for our clients and local community association board members and community managers with continuing education credits via CACM and CAI (CAMICB.org). Epsten, APC’s 2023 Community Association Legal Symposium is approved by Community Association Managers International Certification Board (CAMICB) to fulfill continuing education requirements for the CMCA® certification for 4 CEU’s and is approved for 2 CEU’s from CACM.

This event is an exclusive opportunity to meet with our team and receive updates and insight on case law, legislative changes and trends within our industry.

We invite you to join hundreds of industry professionals and volunteer leaders for: